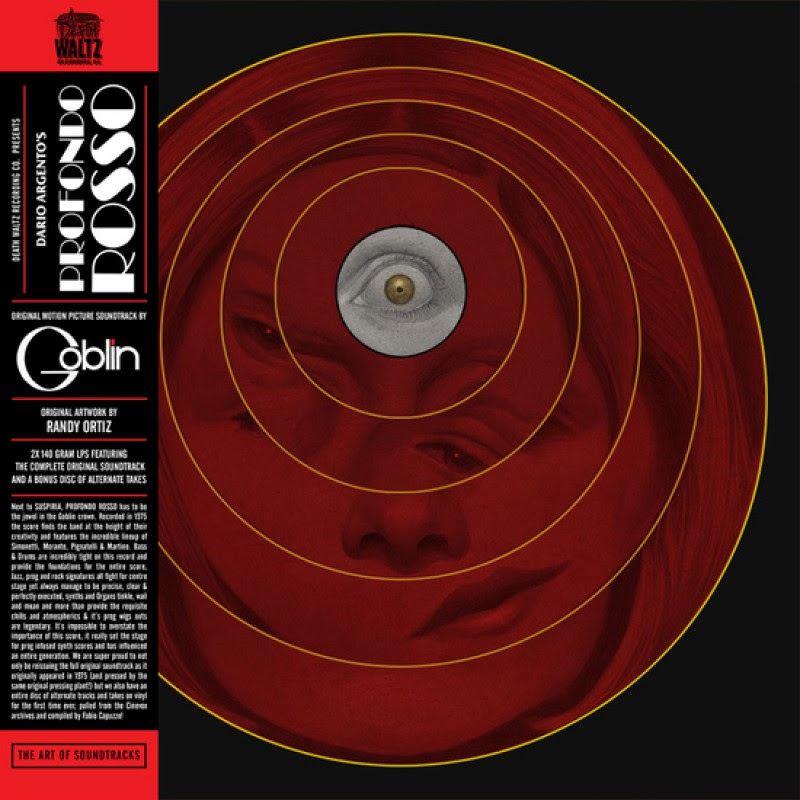 Thanks to the partnership between AMS Records (for years in charge for the vinyl reissues of Cinevox productions) and Mondo / Death Waltz, leader in reissuing cult soundtracks on vinyl (with a catalog of hundreds of titles, including Alien, Drive, Back to the Future & Jaws), a new, stunning edition of Profondo Rosso will be released this month.

It is a double LP, where the first volume is a repress of the original record released in 1975, while the second album includes the ‘film versions’ of the main musical themes. These tracks are specially edited to emphasize in the most effective way some specific sequences of the movie. The second album was curated by Fabio Capuzzo and presents 18 ‘film versions’, amongst which six had never been published before.

It will therefore be possible to hear for the first time ever the main titles of Profondo Rosso, with the legendary Goblin tune interposed by the frightening singsong of School at night composed by Giorgio Gaslini, the versions of Profondo Rosso that comments the preparatory assassin’s rituals and those of Deep Shadows that accompany the protagonist Marc during the discovery of the victims corpses.

The album also includes Death Dies, with the inhuman grinning of the mechanical puppet of the sequence in which Professor Giordani is sadly slain, the electric guitar blues cue that accompanies journalist Gianna Brezzi and the ending of the movie with the screams of the murderer and the theme from Goblin in a shortened version. This unique edition will give the listener the intense emotions of Dario Argento’s masterpiece.