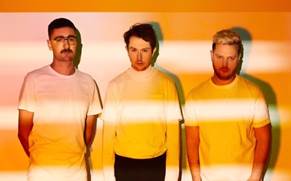 The English rock band Alt-J announced their 3rd album RELAXER which is due to be released on 2nd June. The album has already been presented by two singles: In Cold Blood and 3WW. The record is  the  follow  up  to  their  number  one,  Grammy & Brit Award-nominated  album This  Is  All  Yours and was recorded all over London – from Shoreditch to St John’s Wood, Crouch Hill to Brixton – with producer Charlie Andrew for a third time.

The band also released a short film for 3WW, which is directed by Young Replicant (AKA  Alex Takacs), who has previously made videos for Flying Lotus, Lorde & The xx, and is  described by alt-J’s Gus Unger-Hamilton as “a beautifully shot story of love and loss in the mountains of Mexico”. Check it out here:

alt-J have also launched a new interactive website based upon the cult 90s PlayStation game LSD Dream Emulator that inspired the graphic design of the new record. You can discover the world of RELAXER at www.altjband.com

BMG now owns the master synch rights to all three albums of this fantastic band so please feel free to contact us for more info!